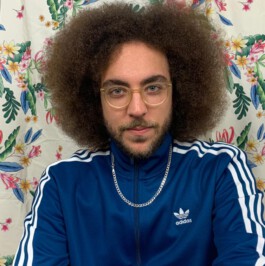 Moses Mawila was born and raised in Frankfurt (Main), Germany, growing up with a Artist & Dancer/Dance-teacher Mother and a record collector father Moses developed an interest for music and the arts from a very young age on.
Growing up with Soul, Funk, Reggae, Punk Rock and Heavy Metal and later one Hip Hop in his teens his interest for music always had a wide spectrum. Through the visit of his first raves and clubs he started to develop an interest for electronic music, that was further fueled by a lot of his friends who started DJing. From that point on his journey into the electronic music scene continued.

From his first party's at Frankfurts Tanzhaus West & Dora Brilliant Club and Silbergold to more underground off-locations such as “Die Villa” or the “28 Steps Down Music Club” in the basement of Frankfurts artist run “Freitagsküche” Restaurant just to name a few.
Through his best friend Alexander K. Einetter moving to Amsterdam the connection with Avos (Roderick Merkx & Tjeerd Wijffels aka DJ Tjizza) started and together they founded the record label “LowMoneyMusicLove” based in Amsterdam & Frankfurt at the same time with party’s in both cities and now approaching the 17th Vinyl release in 2020.

With his move to Berlin in 2016 and him working as an assistant booker to Alex Lindblad from Backroom Entertainment he further grew his knowledge of the scene and it’s workings.
To take the next step after one year and slowly embark on his own journey with various new projects ranging from the "tobeconfirmed booking agency", to his "Sundowner." Open Air Partys at ELSE, the "LowMoneyMusicLove" Showcases at Hoppetosse, doing the bookings for the livestreaming platform "The MUDD Show" and the newly founded record label "System Error" with its residency at Berlin's famous Salon zur Wilden Renate Club in 2020.

The red threat to all his endavours is and has always been to bring people together, support his friends old and new and to provide platforms for all kinds of different artists and talents.