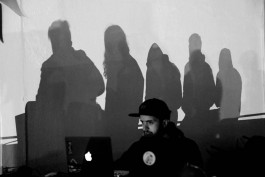 Cosmonaut or Federico Jorcin which is is real name was born in 1991 in Montevideo, Uruguay. Federico started playing music and forming bands at a very early age. Moving on to electronic music production in 2015, Federico started experimenting with sound synthesis and programmed drums on virtual and analog electronic instruments.

His first solo vinyl release has just come out on the new London based label ‘Breakfast Musik’. ‘CUTS’ contains a set of tracks produced at his  studio in Montevideo during April and June 2017, going from house to techno all the way through electro to acid styles. Following ‘CUTS’, three more releases went out on digital labels during this year: Raveros (Uruguay), Yes I Am Rec. (Italy) and Deep Tapes Rec. (Australia).